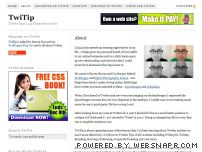 Twitip.com is the brainchild of Darren Rowse (@problogger) Editor and Publisher of the blogsite Problogger.net, Digital Photography School and a book that was named after his Problogger blog. At first glance I was very impressed. Darren’s main mission is to help beginner Twitter users.

TwiTip is about capturing some of the lessons that I’ve been learning about Twitter and how to use it more effectively. It will cover Twitter Tips of all varieties including Writing for Twitter, Branding, Growing a Following, Corporate Tweeting and a lot more. –Darren Rowse

I have been a subscriber and reader of Darren’s Problogger.net and I think he has really hit another home run with this blog. He started this blog officially just last month and he already has 2600+ subscribers to his RSS Feed.

So if you are a Twitter newby I highly suggest you subscribe to Darren Rowse’s new blog Twitip.com