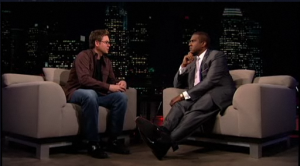 This was an interesting conversation between Christopher (Biz) Stone (@biz) and PBS Show host  Tavis Smiley (@tavissmiley).  I have been saying all along that Twitter should not concentrate on the advertising dollars but on the companies and corporations who are making money on Twitter.  Corporations like Dell, BestBuy, Jetblue and Zappos have made millions from their F_R_E_E Twitter accounts. 3 Million Dollars, Dell And A PayPal “Donate” Button I for one would not mind paying for a premium account from Twitter, especially if you gave me a way to organize the people who followed me and gave me Google like analytics as well. I still think Twitter should also consider making money on  major events like the NFL’s Super Bowl,  the PGA’s Masters and major elections. Twitter’s New Election 2008: Twitter Branding At It’s Best As Twitter grows it will have ample opportunity to make money, I just hope to be a part of that money making process when it happens.

See or listen to the full interview by clicking here.