Answer this trivia question. What does Barack Obama, Katy Perry, Kim Kardashian and Britney Spears all have in common? They are 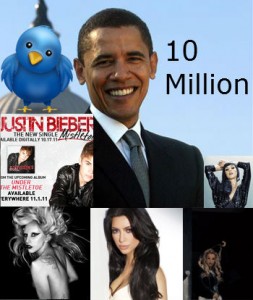 all now part of the Twitter 10 million follower club. They now share this distinction with Justin Bieber and the Queen of all Twitterdome Lady Gaga.

According to Twitterholic the current list of 10 million followers are as follows:

Shakira, Taylor Swift, Rihanna, and Ashton Kutcher round out the top 10 almost 10 million member club. You may recall that Ashton Kutcher celebrated becoming the first person to reach 1 million followers back in April of 2009.

Even though Lady Gaga is currently number one on the list with 14,617,800 at this time of this blog post her Klout score is 10 points lower than Justin Bieber. Kim Kardashian is at number 5 at 10,458,449 followers yet she is 1 point higher in Klout score than Lady Gaga the current number one.  Justin Bieber has a perfect 100 Klout score and I think it won’t be long before he passes Gaga and becomes the first to obtain 20 million followers based on the influence he has in the Twitter world.

One thing we do know is that Twitter is still very relevant in celebrity circles and their followers are still growing with each passing day.  The rate at which one gets followers may have slowed down some but their influence on these followers has in fact grown stronger.  Facebook may have the most users, and yes, Linkedin was the first to go public but Twitter is still the fastest most uncluttered way the world shares news via social media.

What are your thoughts on how Twitter’s influences has shaped the social media and the traditional media universe?

One person, two awesome ideas, millions of happy users. How is it that lighting can strike not once but twice with one person. Jack Dorsey, @jack co-founder of Twitter and founder of Square  has been in the right place at the right time with amazingly successful services.

Twitter has made the distribution of information to the masses both quick and easy. Square up has simplified how small businesses accept credit cards.

Jack’s ultimate goal in life is to make complex things simple.  He sat down with Charlie Rose on the Charlie Rose Show @CharlieRoseShow and explained how challenging it is to make things go from the very difficult to something that becomes very manageable and effortless.

Take a look and give us some feedback on how you use both Twitter and Square. Click here to check out the full interview.

Check out the controversial article that prompted this whole issue of using a company branded Twitter account to defend the publishing of an article. “Christian compassion requires the truth about harms of sexuality,” by Tony Perkins.

This online article was written by a guest writer. The article argued that homosexuality is a mental health issue, which prompted GLAAD, a gay activist group to complain about the article via Twitter and on its site. Responding to GLAAD’s public tweets, a staffer from The Washington Post tried to defend the publishing of the article as giving a platform for “both sides” of the debate. The response only fueled more frustration from GLAAD, which took to Twitter

to say that there aren’t two sides to the issue at all.

The Washington post has since sent out a memo to its staff by Post Managing Editor Raju Narisettithat that tried to explain the use/misuse of that company branded Twitter account.  See the full article and memo via Mashable.

I for one truly believe that every company, both large and small should have a social media policy.  Twitter has grown from something that was considered to be just a passing fad to a communication power house.  If large companies like the Washington Post have to rethink their use of Twitter, what should smaller companies do to insure that they make the right moves with social media as a whole.

So, has this issue sparked a thought on how your company should conduct itself on Twitter.  Have your employees spoken out of turn using your company branded Twitter account?  Isn’t it amazing how this new form of communication has made us have to think about how to respond to certain issues that may come up both now and in the future.

Please post your comments about this growing issue below.